Music is a language that transcends borders and breaks boundaries, as was evident during the Great Music Festival Charity Night Gala as musicians with developmental disabilities moved a global audience representing some 40 countries on Friday in Busan.

An audience of some 70 people, mostly consisting of diplomats, tapped their feet in unison to the cascades of drumrolls by the Aria Nanta percussion band and swayed their heads to the tunes of a wind orchestra.

“It was my first time seeing [their] performance and I was so touched,” said Lovemore Hamweene, attending the concert with her husband, Wray Mulendema Hamweene, the charge d’affaires of the Zambian Embassy in Seoul. “They delivered so much happiness to the audience, and the last performance was especially wonderful.”

Organized as the second installment of the inaugural concert last year, the 2022 Great Music Festival Charity Night Gala in Busan invited four teams and one soloist to perform at the Asti Hotel in Busan on Friday. All of the acts were winners of the Great Music Festival, an annual competition for musicians with developmental disabilities organized by SK Innovation and the Heart to Heart Foundation. 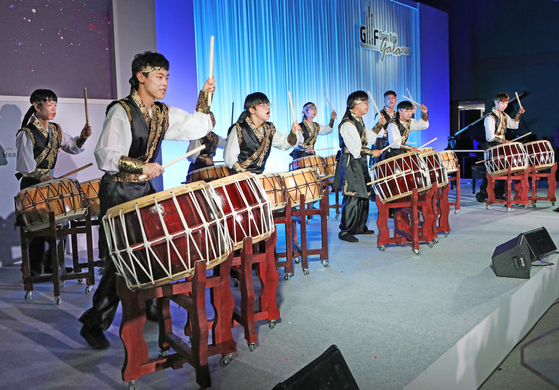 “I am not saying people with disabilities, because we didn’t see that.” – Sarris Panayotis, husband of Greek ambassador to Korea


The concert began with adaptations of Korean folk songs by the all-percussion Aria Nanta team, followed by performances by pianist duo the Console Piano Ensemble of Beethoven’s Symphony No. 5 in C minor “Fate” and “This is me” from the musical “The Greatest Showman.”

The duo was followed by Dream with Ensemble, a team of 10 clarinetists, playing a Divertimento piece by Mozart, and ToTo’s “Africa.” One of the clarinetists, Eun Sung-ho, then played a solo on the piano of one of his favorite pieces: Beethoven’s Piano Sonata No. 14 “Moonlight.” 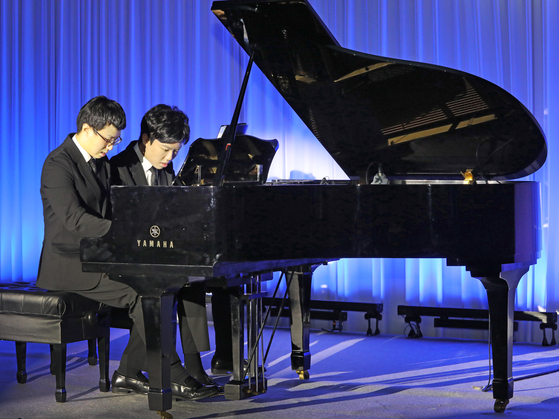 
By the time the Eins Baum Wind Chamber concluded the concert with “Jubilo! Jubilo!” by Martin Cordner, the audience was giving a standing ovation with marked calls of “Bravo!” echoing throughout the hall.

“The musicians that I saw tonight were so well-coordinated, and the audience could really feel their joy in their performances,” said Ekaterini Loupas, ambassador of Greece to Korea.

“It was a beautiful evening, I was amazed by the people performing — and I am not saying people with disabilities, because we didn’t see that,” said Sarris Panayotis, husband of Loupas who himself is also a career diplomat. “We saw artists.”

Some in the audience, by nature of their profession, also saw possible connections between musicians of their countries and Korea. 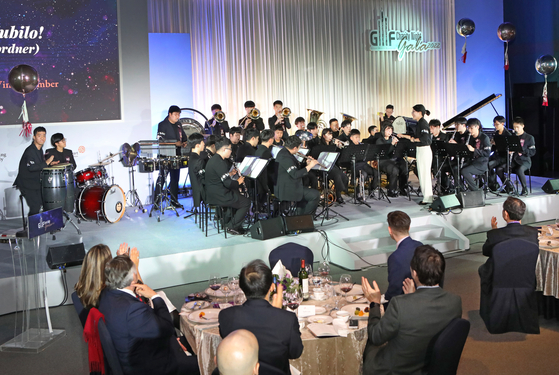 
“When the Aria Nanta team was playing the drums, what went through my mind was that there could be a concert with some Czech bands [joining] too,” said Lucie Nohova, wife of Zbynek Noha, the deputy head of mission at the Czech Embassy in Seoul, in speaking with the Korea JoongAng Daily after the concert.

There are a number of bands consisting of musicians with disabilities in Czechia, including The Tap Tap.

“The idea of bringing musicians with disabilities in Czechia to perform in Korea has great potential,” said Noha. “To see these musicians from various countries play next to each other would be mutually enriching.”

In fact, such collaborations have taken place, though if not by design, but by circumstance and chance.

“The ensemble visited South Africa in September on the occasion of the 30th anniversary of Korea-South Africa relations,” said Lee Ok-joo, chief director of Dream with Ensemble. “The mood in the concert hall was so joyous that members of the audience, including some South African artists with disabilities, decided to join the clarinetists on the stage and dance to the music. Words don’t do justice to what all of us in the hall were feeling at the time.”

“They’re the ones helping many others through their music.” – Chairman Chey

There are estimated to be around 260,000 people in Korea living with some form of developmental disability.

Even if some may dream of becoming a professional musician, not many have the financial means nor the support from their family members to make it a reality.

Some of these musicians’ stories have been made into documentaries, such as “Nocturne,” directed by Jeong Gwan-jo. Jeong followed Eun Sung-ho and his family for a decade to produce the film, which won an award at the Moscow International Film Festival in 2020.

Eun, now 38, was diagnosed with autism when he turned 3. He’s been playing the piano since he was 9, and the clarinet since he was 22. 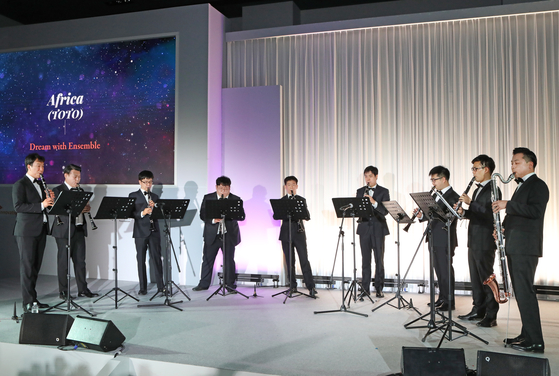 
“As a mother, I have my regrets, like not being able to be there for my other son, while Sung-ho pursued his musical career,” said Son Hye-sook, Eun’s mother, speaking with the Korea JoongAng Daily after the concert. “But you see, as a mother, you cannot but help think what would happen to Sung-ho after I am no longer living. How will he make a living? So every day, we do what we can for that day, to help Sung-ho find a career doing something he loves.”

“I hadn’t seen his face shine like that before,” Son said. “Sung-ho’s condition means he rarely notices what’s going on beside him if he is focused. So he wasn’t aware that there were cameras around him when he was playing the music. But his facial expression caught on the camera said everything — he was so happy when he was playing music.” 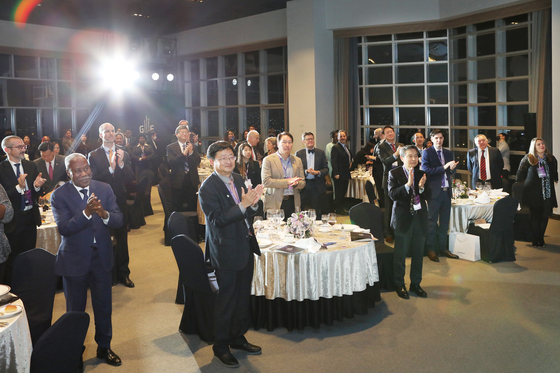 The audience at the Great Music Festival Charity Night Gala 2022 gives a standing ovation at the conclusion of the concert. [PARK SANG-MOON]


SK Chairman Chey Tae-won, who attended the concert on Friday as one of its hosts, also emphasized the unique abilities of the musicians with developmental disabilities.

“Sometimes we misunderstand [and think] that they need other people’s help,” Chey said in his opening address. “But, in fact, they’re the ones helping many others through their music, bringing that positive vibe and energy to everyone.” 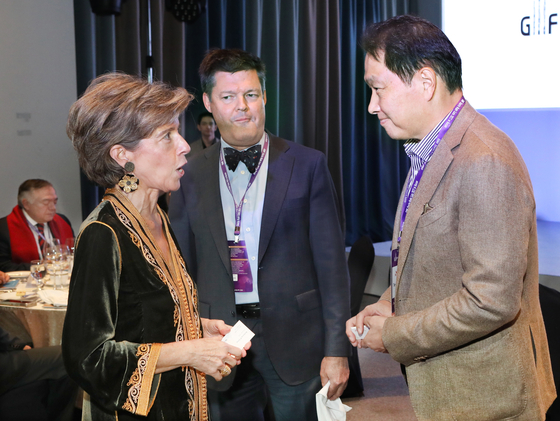 
SK Innovation, together with the Heart to Heart Foundation, has been sponsoring the Great Music Festival since 2017, which has since been joined by 161 teams and 1,785 artists.

“I am very happy to know that there are healthy companies in this country with a very high social responsibility for everyone, including the older generation and people with disabilities,” said Daul Matute-Mejia, ambassador of Peru to Korea, in offering his closing remarks at the concert. 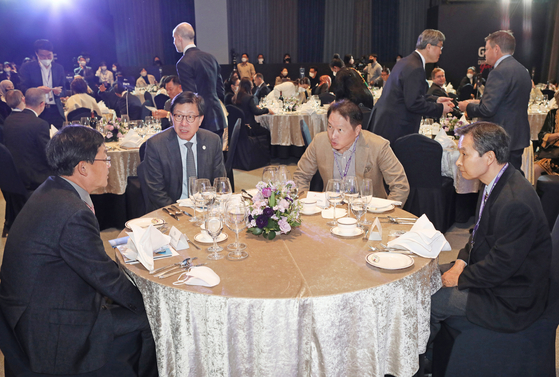 “Busan wants to be the arena for discourse on issues that are [impacting] all of humanity alike.” – Mayor Park

After the concert, the diplomats representing countries from Europe, South America, Africa, Asia and the Middle East gathered at a dockyard located in the Jagalchi Market on Saturday morning. Except for one, all were from member states of the Bureau International des Expositions (BIE), meaning they have the right to vote for the host of the 2030 World Expo.

This year’s Charity Night Gala was held in Busan to help its bid to host the 2030 World Expo.

Recalling the history of Busan, especially how it was able to rise from ashes the of the 1950-53 Korean War to become one of the busiest container ports in the world, Busan Mayor Park Heong-joon emphasized Busan’s readiness to host the event.

“Busan wants to be the arena for discourse on issues that are [impacting] all of humanity, such as climate change, as well all the disparities and inequalities,” Park said in addressing the audience at the gala on Friday. “[The city] is fully ready to make the World Expo resonate the most with the whole of humanity.”

“One more thing I have to mention is that as SK Chairman I am also co-chair of the 2030 Busan Expo Bid Committee. That is my message, you know what [I mean],” Chey said during the Gala night as the audience laughed.


Inside a 379-ton vessel sailing off the glittering sea of Busan, Cho You-jang, director-general of the 2030 Busan World Expo Promotion Headquarters at the city, delivered a presentation explaining the meaning, history, value of the World Expo, and the capacity of the maritime city as the venue to host the 2030 fair under the theme of “Transforming Our World, Navigating Toward a Better Future.” 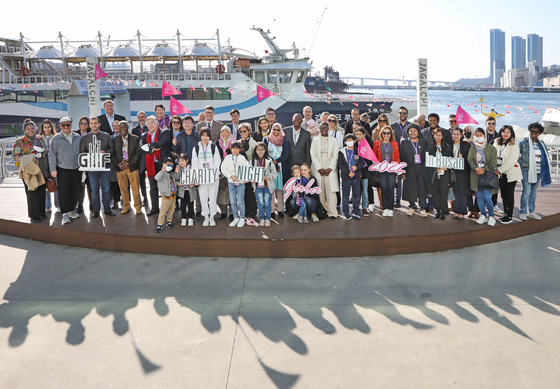 Members of the diplomatic corps representing some 40 countries pose at the sea next to the Jagalchi Seafood Market in Busan on Saturday. [PARK SANG-MOON]


“In order to solve global challenges such as the digital divide and the climate crisis, a holistic consensus from the international community is needed, and we believe that the Republic of Korea can do this well,” Cho said.

“Korea is the only country that has achieved industrialization and democratization simultaneously and has experienced every stage of economic development, thus can act as a bridge between the developing and developed countries,” Cho said. “And the city of Busan is also a symbolic city that led Korea’s great transformation during the [1950-53] Korean War — embracing one million refugees fleeing from across the country and exuding inclusiveness and openness. Busan has also been the backbone of Korea’s economic growth, from the light industry to the automobile industry, and nurtured Korea’s largest conglomerates such as Samsung and LG.”

“The narrative behind Busan’s bid for Expo 2030 is very appealing for developing countries like Chile,” said Mathias Francke, ambassador of Chile to Korea.

“I think Busan has a very high potential [to host the 2030 World Expo], with the city being next to the sea, having so much vibrancy, very modern, and very safe,” said Gabriela Blanco de Matute, wife of the ambassador of Peru to Korea. With Korea being the South American country’s third largest commercial partner, Peru made an endorsement for the Busan World Expo through an official diplomatic document on Aug. 12.

“The Korean government is working hard to win the votes from other countries — I have been in Busan for the expo four times in the last three months,” Matute said. “It is very interesting to see how much investment [the government is putting toward it] and how the private sector like SK and even the newspaper is putting in a lot of effort to host the expo in Korea.” 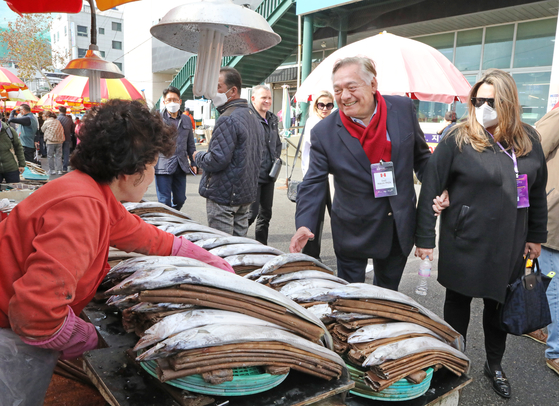 Daul Matute-Mejia, ambassador of Peru to Korea, and his wife Gabriela Blanco de Matute, speak with a local merchant at the Jagalchi Seafood Market in Busan on Saturday. [PARK SANG-MOON]


Many were in awe, seeing that the vendors running the rickety stalls selling live fish and other seafood were all ajumma, or middle-aged women. Nicknamed the “Jagalchi ajime,” or the Busan dialect for ajumma, the diligent and strong grannies of the fish market are a revered symbol of the wartime capital-turned-rich city, as per the explanation of Busan Mayor Park Heong-joon.

Less than a month after the tragic Itaewon Halloween crowd crush, security was strengthened for the entire program. Twenty-two policemen from Busan, including plainclothes officers, followed the groups of diplomats and ambassadors during the fish market tour, while cops patrolled the hotel during their stay.

Departing from Busan Station, the KTX 038 bullet train transporting the attendees arrived at Seoul Station at 4:53 p.m. Saturday. Stationed next to the train was another train covered with pictograms of landmarks of Busan with the words: “World EXPO 2030, BUSAN, KOREA.”