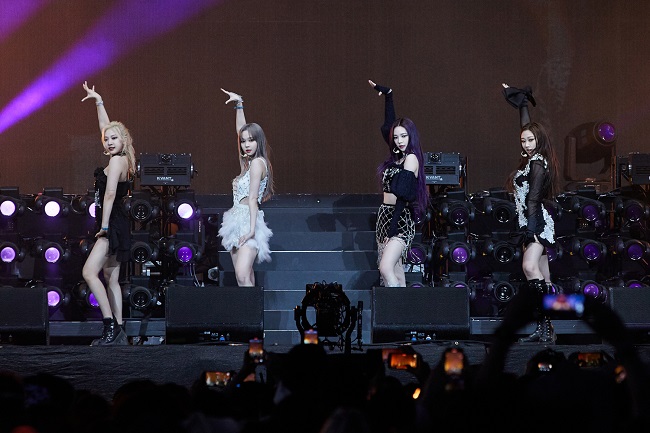 Girl group aespa performs at the Coachella Valley Music and Arts Festival in the United States on April 24, 2022, in this photo provided by SM Entertainment.

Consumption of foreign pop music in South Korea, as opposed to K-pop, stood at no more than 22 percent each month from January to September this year, according to Circle Chart, the country’s benchmark music chart.

It is expected that the proportion will reach a new low not seen since 2017.

Consumption of foreign pop music in contrast to K-pop has dropped from 31.4 percent in 2020 to 27.2 percent last year.

In addition, the monthly consumption of foreign pop music between January and September this year dropped by 12.6 percent.

Twelve foreign pop songs made it to Circle Chart’s top 100 list between January and September of last year. This year, only six songs made the cut.

The dwindling popularity of foreign pop music is largely attributed to the growth of K-pop, led by girl groups, and the lack of hit songs released by foreign artists popular in South Korea.

“Foreign artists popular in South Korea have failed to make inroads in the market. South Korean girl groups have been making major progress and have dominated the charts,” said Kim Jin-woo, head researcher of Circle Chart.