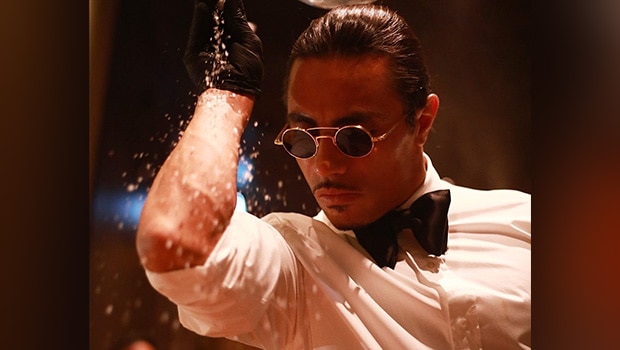 Salt Bae owns 22 restaurants across the US, UK, Greece and Dubai.

Celebrity chef Salt Bae is known for his antics that cost him an entry to the final of the US Open Cup soccer tournament. Now, the organisers of a music festival have said that the chef, whose real name is Nusrat Gokce, has been banned. A few days ago, Salt Bae was refused entry at US Open final for badgering Lionel Messi for a selfie – a move that angered football fans across the world. He was also criticised for picking up the FIFA World Cup trophy.

In a tweet, the Rolling Loud music festival said they will not allow him to attend the event.

“We have also banned Salt Bae from Rolling Loud LA 2023 in March,” the tweet said. It has been viewed more than seven million times and retweeted close to 4,000 times.

Rolling Loud is an international hip-hop music festival held in many parts of the world. Established in 2015, it is “one of the biggest rap-only festivals in the world” according to Complex, while Billboard called it “the be-all of hip-hop festivals”.

Salt Bae runs a popular chain of steakhouses called Nusr-Et that often draws A-listers. He owns 22 restaurants across the US, UK, Greece and Dubai. Celebrities like David Beckham, Usher and Kylian Mbappe have visited these restaurants where he also serves gold-covered steak.

Gokce was born in 1983 in Turkey. His father Fair Gokce worked as a miner.

He opened his first restaurant in Istanbul at the age of 27. Turkish businessman Ferit Sahenk helped the chef financially, due to which he opened branches in Ankara, Dubai and Doha.

Gokce’s life changed overnight in 2017 when he shared a video of himself preparing an Ottoman steak in his signature style on Instagram and sprinkling salt on the meat with his hand shaped like cobra.

Featured Video Of The Day