The fame hungry chef has been slammed after badgering Messi for a selfie, as well as cringey videos with the Argentina captain, Kylian Mbappe and Robert Lewansowski.

His rap sheet also includes picking up the World Cup trophy, a privilege reserved for the winning players, heads of state and FIFA officials, and grabbing and biting a player’s medal.

The chef, whose real name is Nusret Gokce, has was subsequently banned from attending the US Open Cup football tournament.

Now the organisers of the Rolling Loud music festival have taken preventative measures to stop the Salt Bae attending.

“We have also banned Salt Bae from Rolling Loud LA 2023 in March,” they tweeted. 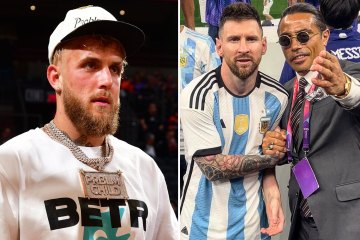 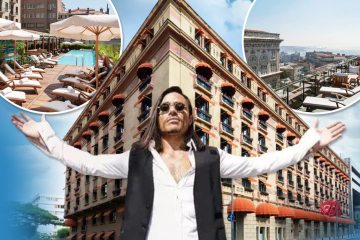 It’s unclear whether the Turkish chef had plans to go to the event but they’re clearly not taking any chances.

After the World Cup final, FIFA was forced to make a humiliating admission that he should never have been on the pitch in the first place.

It’s not the first time the celebrity chef has tried the hog the limelight while rubbing shoulders with football stars.

His followers have slammed an “uncomfortable” resurfaced Instagram video with Kylian Mbappe.

Sitting alongside the steakhouse magnate, Mbappe can be heard saying: “It was a good night.

“A pleasure to come with my man.”

The pair shake hands and Mbappe winks at the camera before Salt Bae gives the footballer a kiss on the cheek.

The chef’s followers said Mbappe appeared “uncomfortable” in the awkward footage from July 2021.

In another video, he can be seen gyrating back and forth while cutting steak for Bayern Munich and Barcelona star Lewandowski.

His behaviour has landed well among some of his followers with one writing: “What an idiotic restaurant clown.”

It’s not only celebrities that Salt Bae has cringeworthy moments with – his customers also get to enjoy that privilege.

His followers blasted him after he posted an awkward clip on his Instagram story spilling juice from a steak all over someone’s phone in yet another embarrassing moment.

The cringy footage shows the chef cutting his famous 24 karat gold steak without realising he is dripping on the phone.

The series of his antics have sparked fury among his followers with one branding him “the clown of the year” and many commenting “unfollow” on his posts.