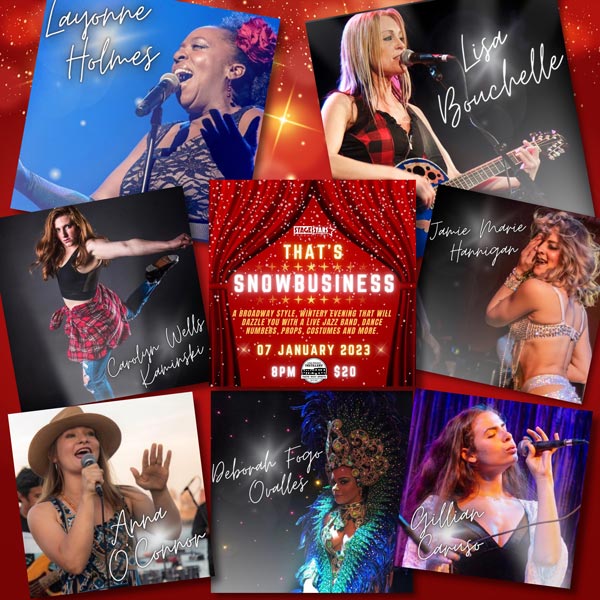 The title track on Lisa Bouchelle’s new CD debuted at #24 on the Billboard Magazine A/C Indicator chart, and reached #21. There have been over 3.8 Million views on TikTok of video content with Lisa Bouchelle & The Bleu music, and videos from the album have been seen nationally on MTVu, in mall retail outlets, and on prestigious websites such as American Songwriter and Ditty TV. Lisa has dueted in concert with Jon Bon Jovi, sung backup for Bruce Springsteen, appeared in off-Broadway productions and is the host of the TV show Rock Star Kitchen, the top-rated original content show on The Comcast Network in the Philadelphia region. Lisa just finished a US tour with Glenn Tilbrook from Squeeze. She regularly performs with Stage Stars Productions The Velvet Stardust Rock Show.

Layonne Holmes has been featured in many Rock ‘n’ Soul Revues produced by Bob Bandiera, then-touring member of the band Bon Jovi. Her work with Bandiera led to an invitation to be a member of Jon Bon Jovi and the Kings of Suburbia, featuring Jon and several Jersey artists doing covers of famous rock and pop songs, including some of Bon Jovi’s own. Throughout her career, Layonne has shared the stage with many music industry luminaries, including Darlene Love, Phoebe Snow, Southside Johnny, Gary U.S. Bonds, Ben E. King, Leslie Gore, Marc Ribler, Glen Burtnik, and Beth Nielson Chapman. In 2001, Layonne sang with Bruce Springsteen on the internationally-televised “9/11 Tribute to Heroes” telethon and appeared on the album of the same name. Layonne began the 11-piece Motor City Revue, a Motown & Stax tribute band that since its founding in 2011, has built such a strong following that it sells out nearly every performance. Additionally, Layonne is a member of Tim McLoone & The Shirleys, a cover band that performs a mix of jazz, classic rock, and “girl group” pop. Layonne’s association with Tim began when she and her mom signed on as volunteers for his non-profit organization Holiday Express. Layonne played the voice of Audrey II in Stage Stars Productions Little Shop Of Horrors.

Jamie Marie Hannigan is a mover, shaker and magic maker spreading wild love. She has shared the stage with, Alicia Keys, Michelle Branch, JaRule, The Backstreet Boys, Mandy Moore, Blondie, Cindy Lauper, and many others. She has performed at world famous NY Couture Fashion Week as well as Michael Jackson’s Official This Is It DVD Release Live where she worked with Michael’s dancers, choreographer Travis Payne and director Kenny Ortega. Theater credits include; You’re A Good Man Charlie Brown (Sally), Blood Brothers (Linda), Little Shop Of Horrors (Audrey), The Rocky Horror Show (Columbia). Jamie Marie has appeared in films such as Cafe Society, (working directly with Kristen Stewart and Steve Carell), Not Fade Away (with James Gandolfini), Step Up, and featured in National Commercials for Nickelodeon and MasterCard to name a few. Television credits include; Orange Is The New Black, Blue Bloods, Law & Order: SVU and Law & Order Criminal Intent. Locally, Jamie has performed with well-known NJ acts like Glen Burtnik, The Wag, Motor City Revue and Remember Jones. She is the founder and director of Stage Stars Productions, est: 2006, creating next-level live band, immersive, theatrical experiences with dancers, flow artists and more.

Cozy lounge seating and seasonal cocktail specials will warm you up during this must see, rare event at The Long Branch Distillery.

Advertise with New Jersey Stage for $50-$100 per month, click here for info

Tickets are $20 and available for purchase online or at the door.

Advertise with New Jersey Stage for $50-$100 per month, click here for info