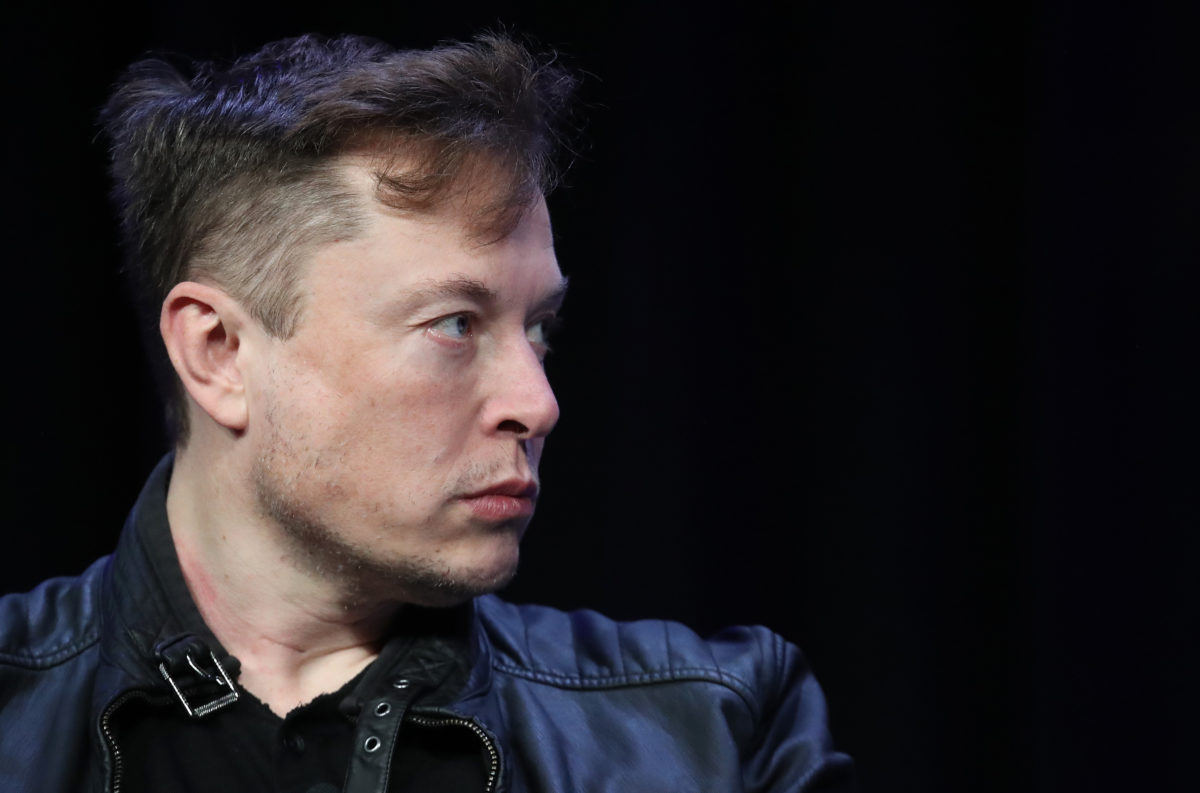 Twitter users are mad at Elon Musk? Must be a day ending in “y.”

The specific reason on this lovely December afternoon was a newly-announced policy posted by the @TwitterSupport account restricting the “free promotion” of competitor social media platforms.

The new policy announcement comes after an especially turbulent week for Musk’s management of Twitter, even by the standards of what has been a notably rocky reign, with multiple journalists getting suspended, and then mostly unsuspended, but not some notable critics of Musk and Tesla, Musk briefly popping into a Twitter Spaces with some of the reporters he had suspended and then leaving in a huff, Twitter Spaces being shut down for nearly a day, Taylor Lorenz getting suspended and unsuspended, and so on.

Many Twitter users (your friendly neighborhood Mediaite contributing editor included) have added links to other social media platforms in their Twitter bios or changed their usernames to direct their followers to find them elsewhere.

The @TwitterSupport thread added that Twitter “will remove accounts created solely for the purpose of promoting other social platforms and content that contains links or usernames for the following platforms: Facebook, Instagram, Mastodon, Truth Social, Tribel, Nostr and Post,” but would “still allow cross-posting content from any social media platform” as well as “[p]osting links or usernames to social media platforms” not specifically listed.

Specifically, we will remove accounts created solely for the purpose of promoting other social platforms and content that contains links or usernames for the following platforms: Facebook, Instagram, Mastodon, Truth Social, Tribel, Nostr and Post.

The final tweet directed users to their help page for more information, but many people were having trouble accessing that link on mobile.

The text of the help page provides more details about what exactly is prohibited, including suggesting that your Twitter followers follow you on Instagram, check out your Facebook profile, or just a direct link to your Mastodon profile.

Including the names of your accounts on other platforms in a screenshot or writing out the links with “dot com,” etc. instead of the exact address is also prohibited. 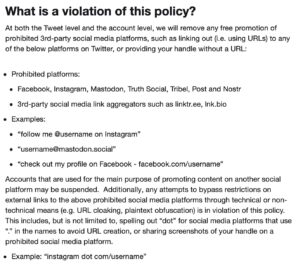 Accounts that violate this policy face consequences ranging from “requiring deletion of one or more Tweets to temporarily locking account(s)” and if you have prohibited content in your bio or account name, Twitter “will temporarily suspend your account and require changes to your profile to no longer be in violation.” 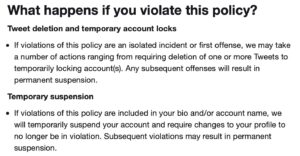 The announcement drew loud complaints from Twitter users — as well as the mockery that is frequently interwoven throughout all debates on the bird site.

A number of users pointed out hypocritical past comments by Chief Twit Musk, as well as highlighting omissions from the banned list like TikTok, the platform under congressional scrutiny due to its Chinese ownership (not to mentioned heavily used for content by LibsOfTikTok). Another loophole several accounts exploited is that paid advertisements are exempt.

How to join Mastodon: https://t.co/lkouys0b1Z

Did Elon’s parents have to pay other kids to be his friends?

So is anyone at your company raising any red flags about the fact that Elon keeps arbitrarily banning people he doesn’t like and then retroactively coming up with reasons to justify it? Do you feel good about doing that? Does that seem consistent with the company mission?

As someone who’s been mostly pro-Elon Twitter, this seems exclusionary and desperate

Directly antithetical to the interconnected nature and intrinsic beauty of the internet https://t.co/hbkRzMG0SE

My own Twitter account is currently in violation of this policy, as both my current pinned Tweet and the link in my bio include my Post. account. So far, it has not been restricted and I’m honestly debating the balance between taking a small step to preserve an account I built over nearly 14 years or just going out in a blaze of glory. There is a certain appeal to metaphorically painting my face blue and yelling “FREEDOM!”

Anyway, I’m @rumpfshaker on Twitter for now, and the same username on Facebook, Instagram, Post., and the journa.host server on Mastodon. Come say hi. Or don’t. It is, after all, still a free country, no matter what some guy who used to be the world’s richest man does after wildly overpaying for a social media platform.

This is an opinion piece. The views expressed in this article are those of just the author.