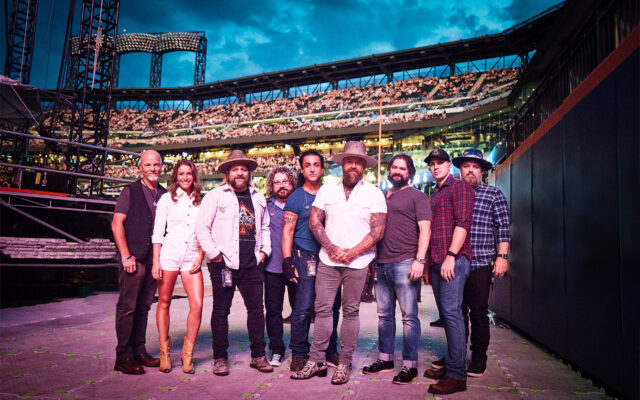 CANTON, OHIO – Zac Brown Band will headline the 2023 Concert for Legends presented by Ford as part of the multi-platinum and Grammy Award-winning recording artists’ national “From the Fire Tour.”   Tickets go on sale this Friday.

The band, the Pro Football Hall of Fame and Hall of Fame Entertainment & Resort Co. jointly announced the tour stop this morning. Tickets for the show, scheduled for 8 p.m. ET Saturday, Aug. 5 at Tom Benson Hall of Fame Stadium in Canton, will go on sale at 10 a.m. ET Friday, Dec. 16, through HOFVillage.com.

“New fans soon will realize what longtime fans familiar with Zac Brown Band already know: This show will be a terrific fit for Enshrinement Weekend,” said Jim Porter, president of the Pro Football Hall of Fame. “The Hall, along with our partners at Hall of Fame Resort & Entertainment Co., are thrilled to reveal this date as part of the band’s national tour announcement. Zac Brown Band stands among the elite performers in the music industry today and bring a high-energy, engaging and entertaining show everywhere they perform.”

“We are thrilled to partner with the Pro Football Hall of Fame to continue bringing world-class performers like Zac Brown Band to Tom Benson Hall of Fame Stadium for the Concert for Legends during Enshrinement Week,” said Hall of Fame Village President and CEO Michael Crawford. “This event held in our unique venue during this special time in Canton is another example of the high-caliber entertainment and unique experiences that we’re bringing to the Hall of Fame Village as we continue to grow our business as a premier destination for sports and entertainment.”

The new set of dates for Zac Brown Band, produced by Live Nation, arrives on the heels of 2022’s “Out in the Middle Tour” and the release of “The Comeback (Deluxe)” album, which features re-recorded tracks with some of music’s biggest stars, including Blake Shelton, James Taylor, Jimmy Buffett, Cody Johnson, Jamey Johnson and Ingrid Andress. The “Out in the Middle Tour” saw the band perform at Wrigley Field, Hollywood Bowl, Truist Park and the famed Fenway Park, where they hold the record for most consecutive sold-out shows with 13. Just ahead of their own record-breaking sellout, Zac Brown Band was inducted into the Fenway Music Hall of Fame, joining only Paul McCartney and Billy Joel.

The “From the Fire Tour,” which marks the band’s 10th North American tour, will continue through November. It will showcase “Zac Brown Band’s one-of-a-kind, Southern rock style, serving as an ode to fans and those that have lent a helping hand to pull this country out from the fire of these past few years and helped us all get back on our feet and unify as one,” the band said in its release.

The band will perform more than 30 shows and will be joined by an incredible group of opening acts on select dates throughout the tour, including Marcus King, Tenille Townes and King Calaway.

The opening act for the Concert for Legends in Canton will be announced soon.

“This past year was monumental, and we’re thrilled to bring all that momentum with us into 2023 and onto the ‘From the Fire Tour,’” Brown said. “We are all like family in this band and having the opportunity to bring our music from city to city is something we never take for granted. We can’t wait to be back out on the road with our fans.”